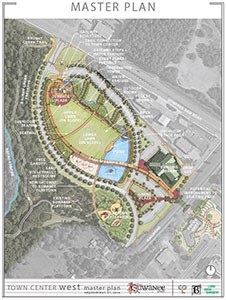 The Suwanee City Council unanimously approved the master plan for a future city park at their September 27 meeting.

Located on the approximately 25-acre site known as the DeLay Property, the new park will be situated behind the Suwanee library and PlayTown Suwanee on Suwanee Dam Road. The property was purchased in 2002 as an early acquisition of their community-driven comprehensive park and open space initiative.

"The success of Town Center Park has exceeded all expectations," said Suwanee Mayor Jimmy Burnette. "The park draws over 200,000 visitors annually to events, as well as regularly serving our 18,000 citizens. The new park will help ease the demand on the existing park and surrounding community."

The park will feature a mixture of urban and rural environments, including:

The new park design is influenced by the style and quality of Town Center Park, but is by no means a replica, and will have its own unique character, personality, and purpose. Plans call for an accentuated pedestrian connection by reworking City Hall Park into a visible, logical linkage of the two sites. The topography of the new park will allow it to overlook Town Center, further enhancing the relationship of the two spaces.

The biggest change this area will see is the realignment of Main Street, which will shift around the park and exit onto Suwanee Dam Road at an existing traffic signal, greatly improving the safety and traffic flow by allowing the median break on Suwanee Dam Road to be closed.

Over the last few months, the City of Suwanee has hired a team of professionals and sought input from community members via stakeholder interviews, over 1,000 in-person and online surveys of park users, four planning workshops, two design charrettes, and a variety of other meetings and presentations. The anticipated cost associated with the new park is roughly $12 million; a timetable for construction has not been established.

"Concepts were developed and refined through this process with the needs and wants of all stakeholders in mind," said Burnette. "The community input led to a design that maximizes the opportunities of the site and provides diverse experiences."