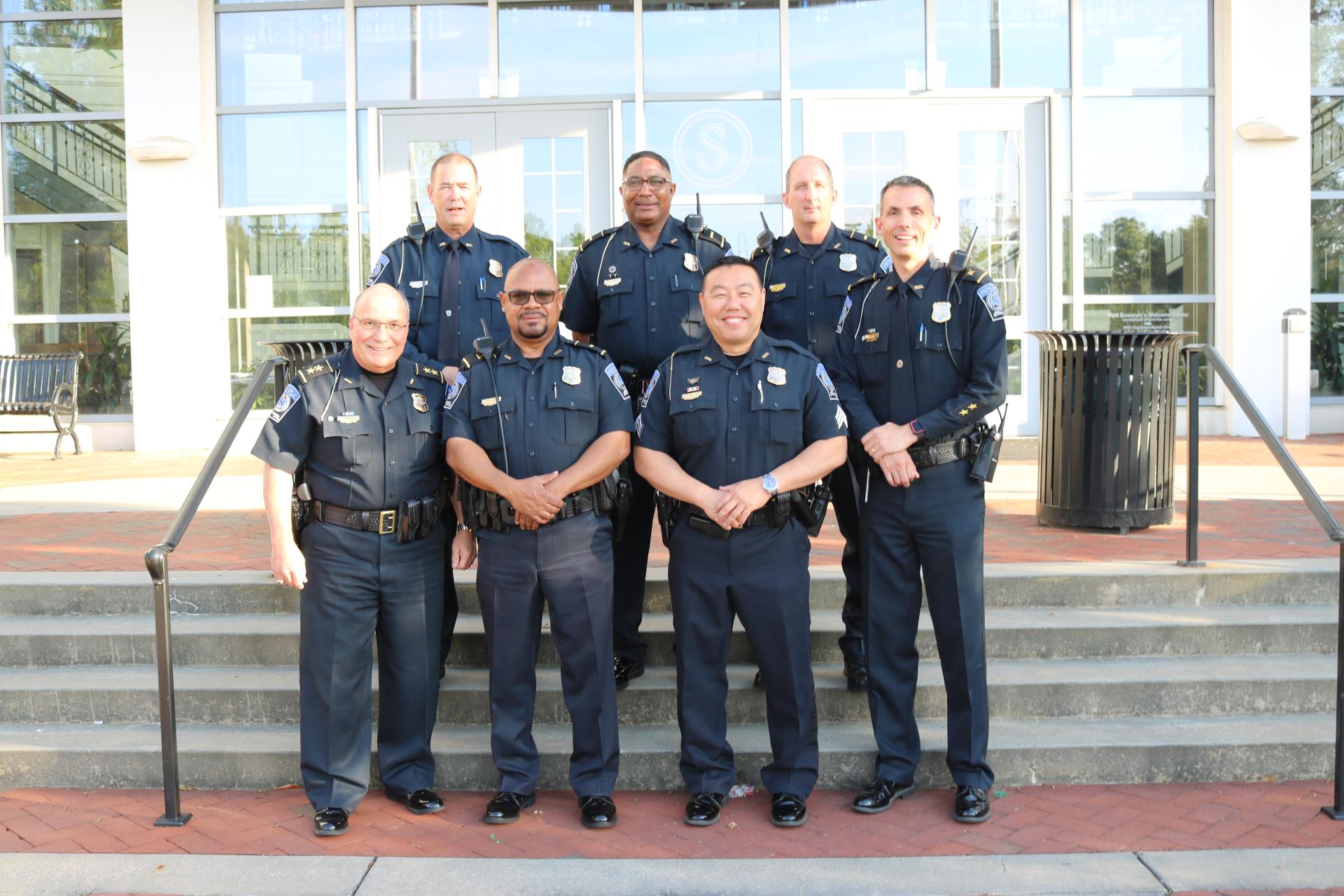 Deputy Chief Cass Mooney has been with the Suwanee Police Department for 21 years, serving in the Patrol, Communications, Selective Enforcement Unit, and Administration divisions. Deputy Chief Mooney holds a Master of Public Administration with concentration in Justice Administration and graduated from the FBI National Academy Session 236.

Lieutenant Jeff Dickens has served the community as a member of the Suwanee PD for nearly 26 years and is currently assigned to Selective Enforcement Unit. He has previous served in Patrol and has 12 years of military experience.

Sergeant Simon Byun is approaching his eleventh year with the Suwanee Police Department. Byun is currently assigned to the Criminal Investigations Division and is a member of the Special Response Team. He has also served in Patrol, and as an Investigator with the DEA High Intensity Drug Trafficking Area (HIDTA) Task Force. He holds an associate degree in criminal justice.

Sergeant Kevin Skinner has served the community as a member of the Suwanee PD Patrol division for 12 years. Skinner holds an associate degree in accounting, a bachelor’s degree in criminal justice, and a master’s degree in public safety administration.

Sergeant Robert Stevens has been with the Suwanee PD for the last ten years. He is assigned to Patrol, and has worked in the Criminal Investigations Division. Stevens triple majored in criminal justice, sociology, and business at Georgia Southern University and served as a Corporal with the United States Marine Corps.

Corporal Chance Belcher has been with the Suwanee Police for nine years. He is assigned to the Criminal Investigations Division and is a member of the Special Response Team. He previously worked in Patrol and the Selective Enforcement Unit. Belcher is an accident reconstruction specialist and field training officer, and was the recipient of the Gwinnett Valor Awards Merit Award.

Corporal Jeff Covert joined the Suwanee PD in 2017 having previously served the community as a Senior Deputy with the Gwinnett County Sheriff’s Office. Covert is a retired United States Marine Corps Master Sergeant. He holds an MBA in project management and a bachelor’s degree in information technology.

Corporal Tylon Johnson has been a member of the Suwanee Police Department for the past year and is assigned to patrol and is a member of the Special Response Team. He previously served as a sergeant with the Hall County Sheriff’s Office. Johnson served 11 years in the United States Marine Corps infantry, with deployments to both Iraq and Afghanistan, and received an award for valor while in Iraq. Johnson holds a Bachelor of Arts in forensic psychology.

Corporal Brody Thomas has been a Suwanee Police officer for nearly six years. He is assigned to Patrol and is a member of the Special Response Team, and previously worked as a dispatcher. Thomas holds a Bachelor of Science degree in criminal justice with a forensics concentration.

“I am proud of all of our officers and employees at the Suwanee Police Department,” said Chief Jones. “I am especially honored to promote these 11 officers who have worked very hard. I wish them well in their careers, and I want to do everything I can to make each one successful.”